Behaviour change has always been promoted as the ultimate aim of social marketing efforts. But it can be a difficult task to achieve, especially when it comes to addressing addictive behaviours like smoking and alcohol consumption. Of course many social marketing practitioners have long realized we can’t achieve 100% behaviour change. Some habitual behaviours can’t be changed immediately and therefore we encourage the performance of the behaviour in moderation. We end up promoting the responsible performance of certain addictive and potentially dangerous behaviours. And sometimes we go as far as using laws to discourage the practice of undesirable behaviours in favour of desirable ones.

This approach has indeed forced us social marketers not to be too judgmental of the very behaviour we are trying to modify when addressing target audiences through campaigns. Instead of telling teenagers not to engage in sexual activity, we encourage the practice of safe sex with condoms (much to the disapproval of proponents of abstinence). Instead of telling drinkers not to consume alcohol or engage in binge drinking, we tell them to drink responsibly and that means consuming only a certain amount of alcoholic beverage. Instead of telling intravenous drug users not to re-use or share unclean needles, we encourage them to exchange their used needles for clean needles. Instead of telling smokers not to smoke, we place a ban on smoking in public places. (If you haven’t noticed by now, in all these examples, the behaviour is allowed to continue but in a manner that is safe for those who are either directly or indirectly involved.)

On July 15, 2013, Jamaica implemented a ban on smoking in specified public places. Many critics see this as an attempt to force smokers to quit. If you can’t smoke freely anywhere, then what is the point in continuing to smoke? In effect the smoke-free air law reduces the available spaces for the smokers to perform their smoking behaviour. This therefore makes it difficult for the behaviour to be performed and implicit in that is the hope that the behaviour will be reduced. It is unlikely that this campaign will result in a drastic reduction in smoking behaviour as persons can find creative ways to smoke in private spaces, if they really must do so.  But one hopes that the campaign will lead to smokers finding it so difficult to locate an appropriate private space for smoking that they will eventually give up. Hopefully, evaluation research of the Jamaican situation will shed some light on whether a ban on smoking in public places actually leads to smoking cessation. For more information on the smoking ban in Jamaica, see here.

In an ideal world for most of us, we want no smoking; therefore smoking becomes a competing behaviour for what we desire. By introducing a ban on smoking in public places, the government of Jamaica has increased the nonmonetary costs of performing smoking.Â  Examples of nonmonetary costs in this case relate to the negative public recognition of the smoker who is caught smoking in an area where it is banned; or the time it may take to find somewhere to smoke and subsequent frustration of not being able to smoke as freely as one would wish. In fact, there are legal ramifications here as you can be arrested for smoking in a location where it is banned.

Three Arrested For Smoking At Sumfest 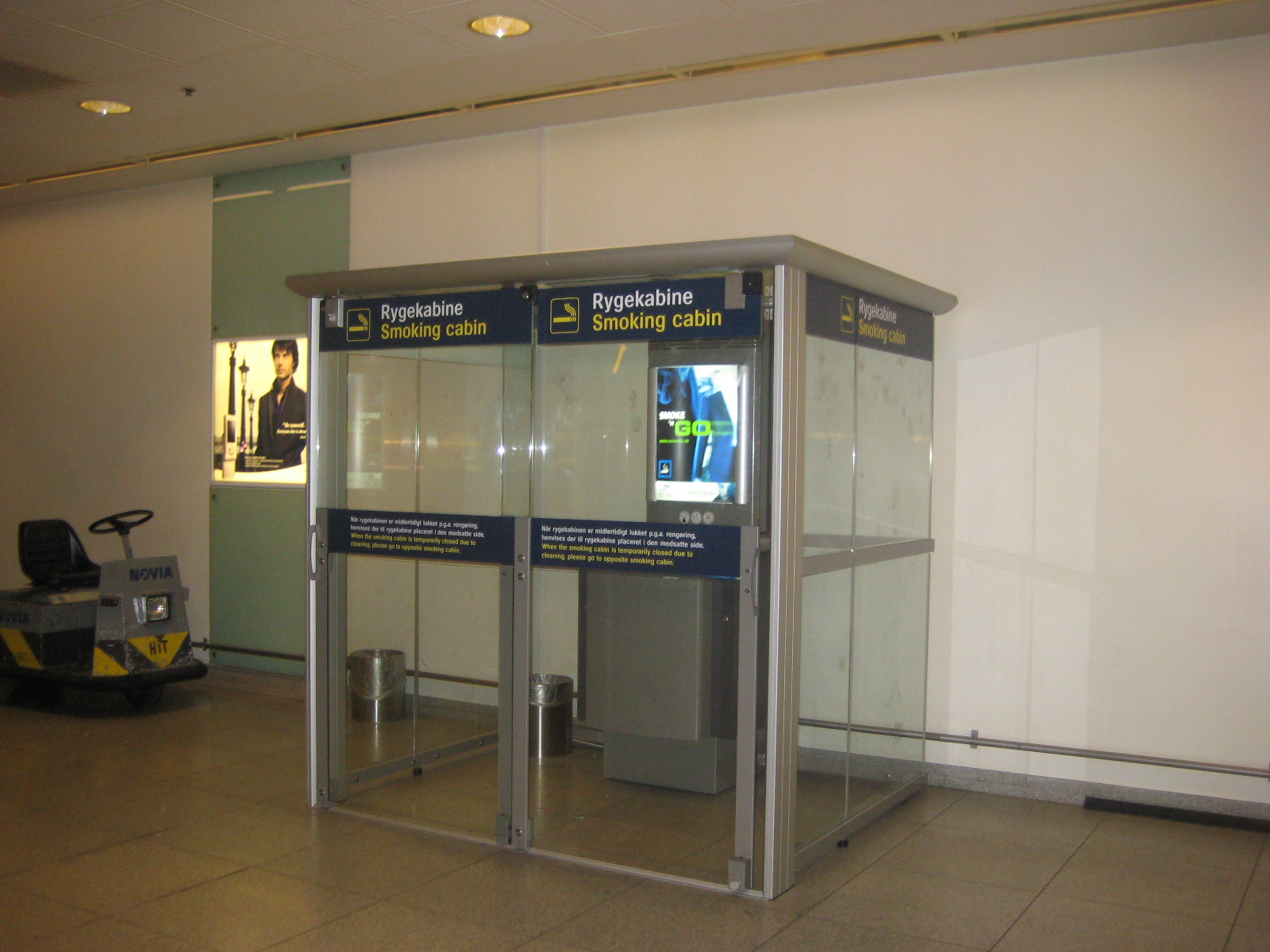 An example of a smoking room at Copenhagen Airport. Photo courtesy http://spottedbynormanncopenhagen.com/

In light of the Reggae Sumfest incident, Health Minister Dr Fenton Ferguson has issued a stern warning to smokers, reminding them that while the ban is currently undergoing consultation, the legal implications are still in place for offenders. Despite the public backlash that followed the ban on smoking, there has been some support coming out Western Jamaica. And if early indications are anything to go by, it seems there has been a decrease in cigarette sales following the ban.

In some public places such as airports, there are rooms designated for smoking. Interestingly, some of these chambers have transparent walls and so you can see who is smoking. If you are a smoker who is easily embarrassed, you would think twice about smoking in a chamber where passers-by can stare at you engaging in this socially undesirable behaviour. But remember we are not judging the behaviour here.Â  By placing a ban on smoking in public places, we are allowing smokers to do their smoking behaviour privately, in a way that is safe for the rest of us given the dangers of passive smoking and second hand smoke. 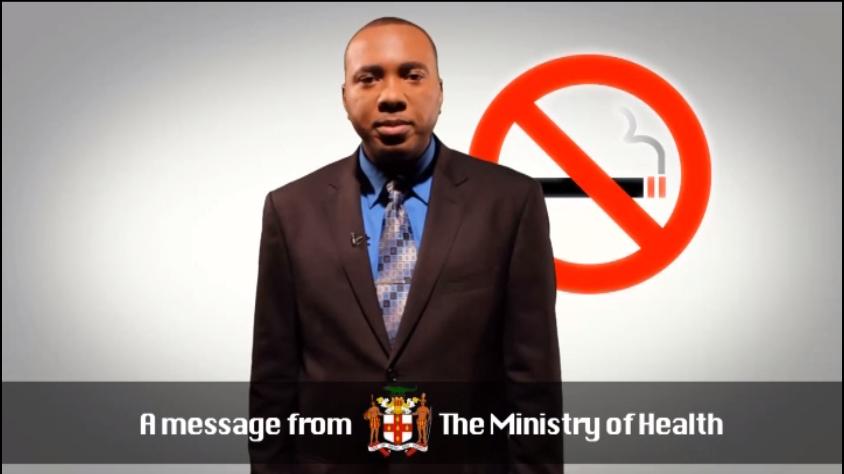 When it comes to attempts to curb smoking, it has always been argued that it is better to focus on prevention than on cessation. It is better to focus resources on discouraging non-smokers from taking up the habit than on discouraging seasoned smokers to give up an addictive habit. Since the implementation of the ban, the Health Promotion and Education Unit of the Jamaican Ministry of Health has been airing a 30-second message on radio and television through which persons are given examples of places where it is illegal to smoke. The message ends with the line “Smoke-free public places, it’s your right, protect it” implying that the information presented is intended for non-smokers who must now protect their right to smoke-free air. This smoke-free campaign has been careful in its message design as at no point are smokers told to stop smoking; instead they are reminded that it is illegal to do it public places. But arguably, herein lies a shortcoming of the campaign.

Appropriate infrastructure or programmes should have been established to help the smoker who must now deal with the dilemma of finding somewhere private to smoke. Maybe one approach to help smokers who feel they are in fact being discouraged from smoking would be to suggest to smokers how they could still perform their addictive behaviour in a manner that would cause no harm to others in public settings. Maybe the campaign should have built some smoking chambers with glass walls so at least the smokers would not feel like they are being discouraged from performing their smoking behaviour. Maybe there should be an increase in services such as telephone hotlines and counseling programmes to help smokers to quit, especially for those who are strong-willed enough to want to quit. The ban on smoking campaign considers the health of non-smokers. But have we fully considered the smoker? Yes, we can be fatalistic and think most smokers are going to die of lung cancer anyway, so let’s just leave them to time and focus on the health of non-smokers. Maybe there is something that can still be done for the smoker, while at the same time maintaining the ban on smoking in public places for the health of non-smokers.