Jamaica has been addressing issues regarding human trafficking in recent times. In a press release dated June 18, 2013 from the National Task Force Against Trafficking in Persons (NATFATIP), of Jamaica’s Ministry of Justice, we learn that a number of public awareness activities have been implemented since April 2012 including public fora, outside broadcasts, the production of flyers, posters and other promotional material. Since then, attempts at further public education have been made.

On September 23, 2013, the International Day against Sexual Exploitation and Human Trafficking of Women and Children, a public education campaign against human trafficking was launched. This phase of the campaign included the production of 5000 flyers and 600 posters as well as the placement of messages on 13 buses which travel around the Corporate Area of Jamaica and the mounting of 7 billboards in major towns such as Kingston, Portmore, Montego Bay, Ocho Rios and Negril. The public education material were donated by the Military Information Support Team of the US State Department. 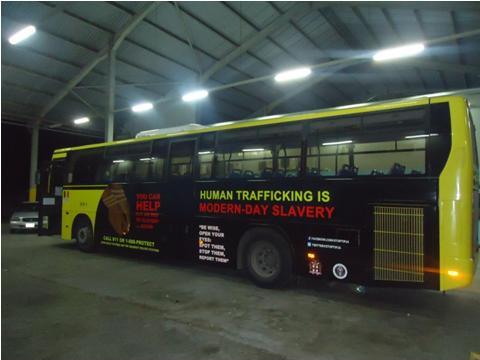 An example of the human trafficking campaign bus signage. 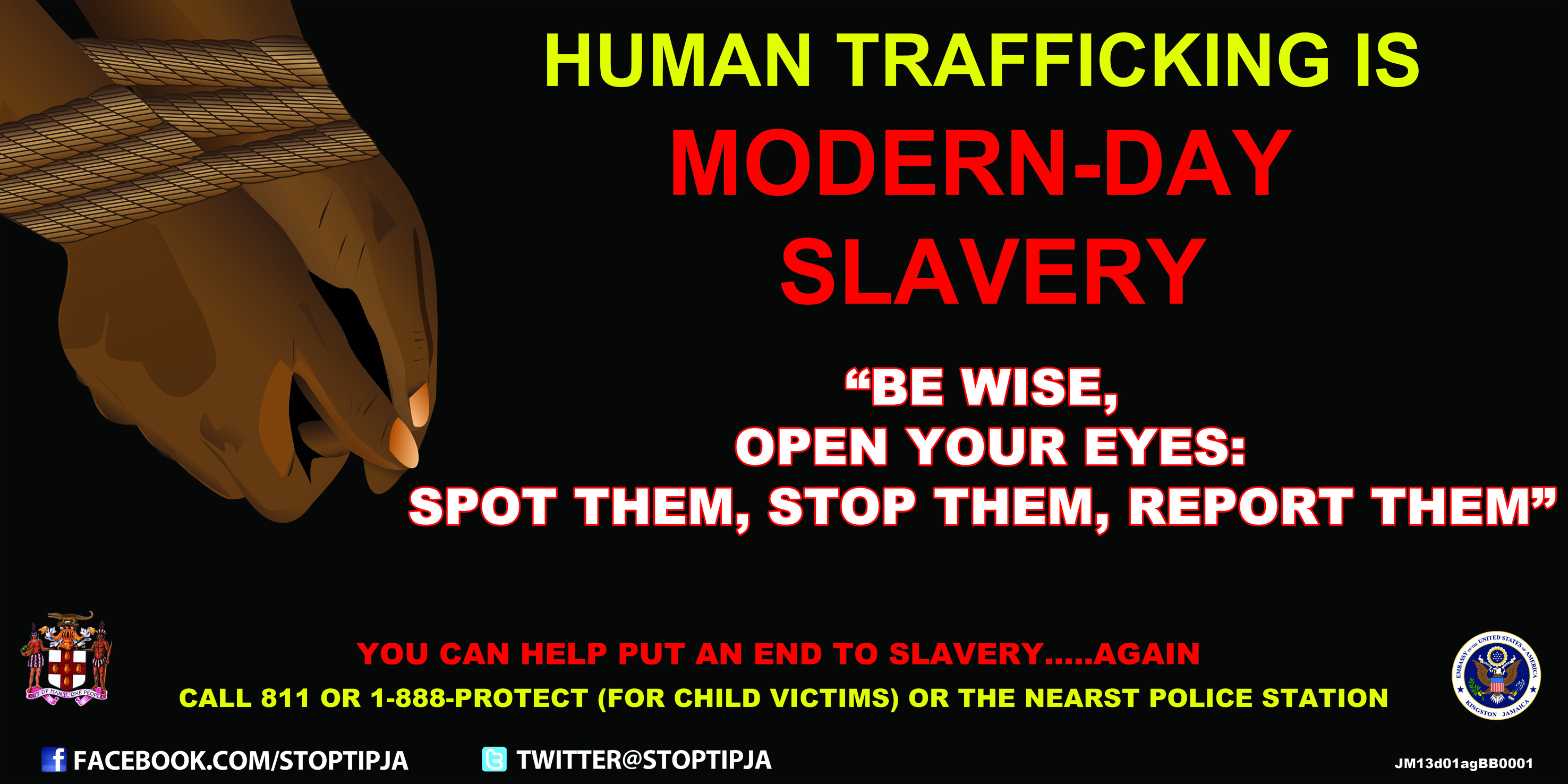 An example of the human trafficking campaign billboard.

An example of the human trafficking campaign billboard on location.

Be wise, open your eyes, spot them, stop them, report them.

At this point it is not clear who is the “them” that we are to spot, stop and report. But one can assume it must be the traffickers. Then we are reminded by message 3:

You can help put an end to slavery…again.

And afterwards there is a call to action by message 4:

At the very bottom of the billboard, we see links to Facebook and Twitter which indicate that the campaign also utilizes some social media platforms. Apart from the words, there are three images: one showing hands tied and the other two representing the Jamaican coat of arms and the Embassy of the United States of America in Kingston, Jamaica. 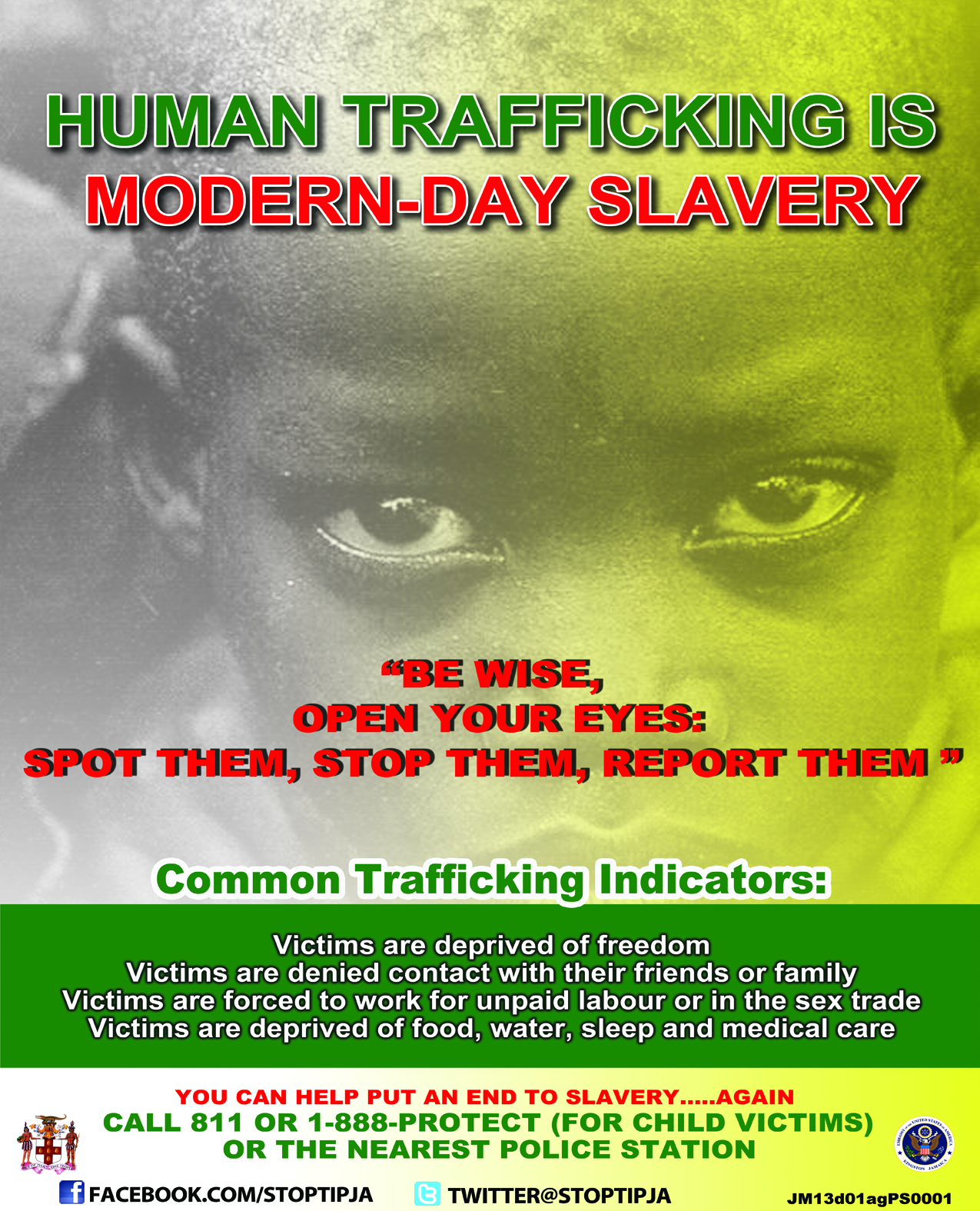 Above is an example of the content that appeared on 600 posters and 5000 flyers which gave more details than the campaign billboard.

Congratulations to the campaign designers for not repeating all the information from the poster on the billboard – as can be seen sometimes when some campaigns attempt to integrate their many messages for consistency. That would be too much information for a billboard which already has about 4 worded messages including phone numbers, along with 3 images, and 2 links to social media.

Several advertising experts will argue that effective billboards must contain only one simple message with few words – about fewer than 10 words. A quick review of these three sites (site 1, site 2, site 3) supports this argument. A billboard is usually placed alongside a road and is meant to be seen mostly by drivers. No doubt, pedestrians will be able to read a wordy billboard. Â But drivers, while driving in free-flowing traffic, will only be able to see the billboard between 7 to 10 seconds, depending on the speed at which they are driving. The only time one can expect drivers to read a wordy billboard is when they are â€œstuck in traffic.â€

Arguably, if you are driving by a wordy billboard and you miss a part of it, you can simply finish reading it the next time you drive pass and hopefully the billboard is placed along your regular driving route, so you can keep reading it on each trip until you have read it fully. Some may argue that the human trafficking billboard is too wordy. Others may say that this is a serious issue and it needs a lot of attention, including many words placed on a billboard. But a wordy billboard is not necessarily an effective billboard.

Human trafficking is a complex issue and based on information from the June 18 press release, the NATFATIP of the Jamaican Ministry of Justice has been implementing not only public education initiatives but also training programmes and shelters for victims. Complex issues require not only a well-coordinated response but also effective messaging. I am eager to see the messaging strategy for future phases of this human trafficking awareness campaign.

Billboard and poster artwork were provided courtesy of the National Task Force Against Trafficking in Persons (NATFATIP).