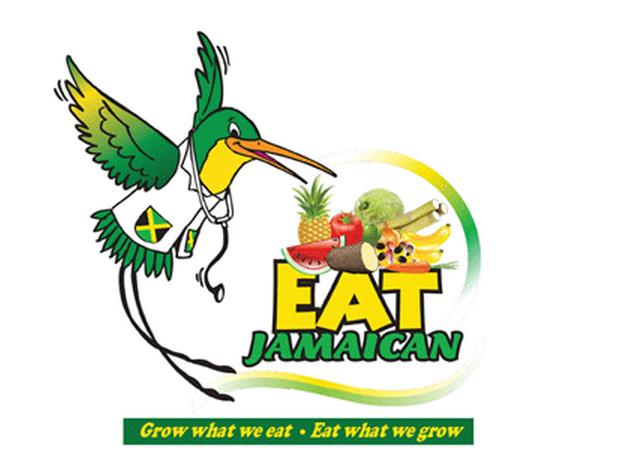 Logo: Grow what we eat; eat what we grow.
Courtesy: moa.gov.jm/EatWhatWeGrow/

The ‘Eat Jamaican’ campaign, with its catchy slogan: “grow what we eat, eat what we grow” celebrates its 10th anniversary this year. When the campaign was launched in 2003, by the Jamaica Agricultural Society, November 25 was declared Eat Jamaican Day in Jamaica. This year to commemorate the 10th anniversary, November is being recognized as Eat Jamaican Month. And there will be several special events to celebrate the occasion. The “grow what we eat” message is not totally new as we learn it has been seen before, since Jamaica’s independence.

Over its 10 years of implementation, the “Eat Jamaican” campaign has received mixed reactions:

A venture of this kind also has the effect of bringing down the cost of the import bill for agricultural produce, which has been showing a decline over the last two years.

‘Eat What You Grow’ Slogan Catches On At St Thomas Infirmary

I wonder if the concept of grow what you eat and eat what you grow applies to people like me. I believe that if this concept became law, I would surely die of starvation.

REGARDLESS OF who first publicly proposed the concept of ‘eating what you can grow’, it is a good one.

The “Eat Jamaican” campaign has been implemented in part to address Jamaica’s rising food import bill. According to the Statistical Institute of Jamaica (STATIN), during January to May 2013, Jamaica’s food import bill rose by 7 per cent. Total food imports during that period was US$421million, up from US$394 million for the same period in 2012.  What does this mean for the effectiveness of the “Eat Jamaican” campaign?

According to the Jamaica Agricultural Society, the objectives of the campaign were:

Going forward, the “Eat Jamaican” campaign will need to revisit its objectives and ensure that they are measurable and behaviourally focused. Audience segmentation will need to be incorporated as a key campaign strategy to ensure that messages are tailored for different segments of the Jamaican population – for example, those who are already eating Jamaican food regularly and need to maintain this behaviour versus those who are not eating Jamaican food as often as they could, and find it difficult to do so; or those who already engage in gardening versus those who don’t. How about a specific objective that encourages Jamaicans to eat meals with Jamaican food at least five days per week? Or a measurable objective that focuses on promoting the behaviour of home gardening or other agricultural activities?

Assuming that many Jamaicans are already aware of the need to ‘eat what we grow’, the Jamaican Ministry of Agriculture and Fisheries along with the Jamaica Agricultural Society must now focus efforts on influencing the gardening and eating behaviours of Jamaicans.